No Result
View All Result

Awesome Things You Should Learn about Idle Heroes Pro Game

by Elliott Nathan
in Games
0

Idle Heroes pro game was developed by developer DHGAMES. It was released for online platforms in 2016. Since then, it has gotten several million downloads and great ratings from critics and users alike. Even after a few years from its release, the game stays popular among the fans.

The game provides a platform to play with numerous players across the world in an adventurous journey through the Sarah Forest to High heaven. One must lead their band through ruins to battle evil forces.

Features of the Game

One can still leave their heroes to train while one is away. Hence, when one actually resumes gameplay, the heroes shall be strong with additional abilities. Therefore, one doesn’t have to stay on their phones for hours together to build a powerful team.

There is a feature for ‘evolving’ one’s band of heroes. Each hero comes with specific skills and they can be trained to become powerful and further converted into an even greater form.

There are numerous battlegrounds, dungeons, and even more quests and guilds to keep one engaged and hooked to appear victorious in this game.

One can play with friends or players across the globe and fight a war for gaining control of the continent.

Players can even compete to reach the top of the leader board in Idle Heroes Pro for rewards and battle it out in the arena. 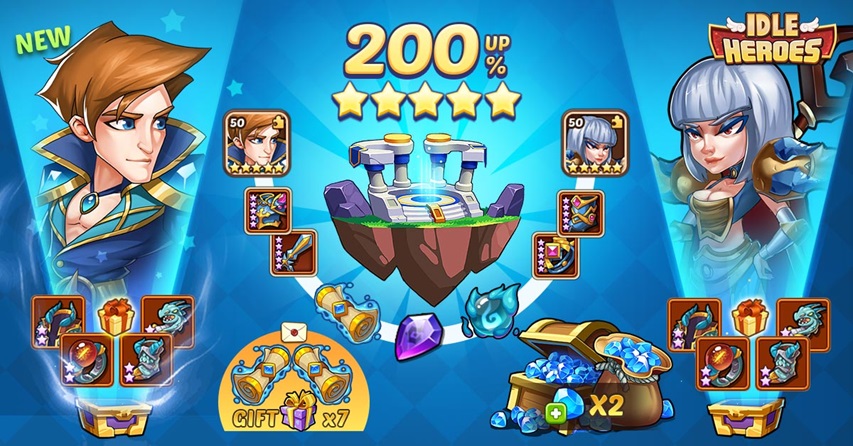 This is an excellent strategy game living up to its name. It’s rightly termed ‘idle’ in its title as this aspect is present in several features of the game. Other role-playing games involve hours of investment, which might be enjoyable for the same, however, it might become tedious. Hence, this game is a game-changer of sorts as one can send heroes to battle even when the person is offline. It would be great if a player knows how to play idle heroes to lead in the game faster. The heroes shall fight for hours and once the user is back online, he can gain the benefits of the resources the heroes have collected in that passing time. This is a great option for casual gamers who only indulge in gaming when they are free from other work but still would want to progress through the game.

That being said, this feature doesn’t compromise with the quality of this game. If the player wants to know how to play idle heroes pro, simply has to set up their heroes optimally so that their position, faction, health and comparative positioning of enemies, all is in order. This shall allow the heroes to land great attacks upon the enemies and help the player in progressing through the game even when he is offline.

Once the battle starts, the heroes fight automatically, without any outside assistance from the player. Therefore, this game is rightly one of the topmost RPGs of all time, with the features it provides.

What Can You Expect From SkyCheats’ Super People Hacks

Have More Visitors and Generate Revenue through the use of Games

Why Games Are Accepted Offline Games?

What Exactly Are Online Games?

What Can You Expect From SkyCheats’ Super People Hacks

Have you ever played continental rummy? Read this to enjoy this variant

No Result
View All Result